The definition of gluten made by the Codex according to the special dietary standard for the use of people with gluten intolerance is ‘a fraction of protein insoluble in water and 0.5 M NaCl found in wheat, rye, barley, oats or hybrid varieties and derivatives thereof, which some people cannot tolerate’. It shaped.

WHAT IS GLUTEN FREE FOOD?

Gluten-free food According to the Codex standard for special dietary foods for the use of people with gluten intolerance;
a) Wheat (for example, all Triticum species, durum wheat, gum and camouflage), rye, barley, oats or hybrid varieties of these or one or more components containing one or more of them, gluten amount does not exceed 20 mg / kg consumer food sold or distributed,

The gluten content of one or more components containing wheat (for example, all Triticum species, durum wheat, gum and camouflage), rye, barley, oats or hybrid varieties thereof, is reduced to a specific consumer reduced gluten content by 20-100 mg / kg. food is sold or distributed.

According to the Turkish Food Codex Communiqué on Foods Suitable for Individuals with Gluten Intolerance, the term kullan gluten-free ve and “very low gluten” can be used provided that the gluten level in the food to be presented to the last consumer does not exceed 20 mg / kg and that it does not exceed 100 mg / kg.

EFFECTS OF GLUTEN ON DOUGH:

The biscuit has three main components; wheat flour, oil and sugar. Flours having a gluten content of 7.5-12% in quantity are used for various biscuits. The quantity and quality of the protein contained in the flour are the most important factors affecting the flour quality. Among proteins, gluten proteins (glutenin and gliadin) have a very important place. Glutenin and gliadin proteins are hydrated during the kneading of the dough and combine with various chemical bonds to form gluten in the elastic and plastic structure, which significantly affects the properties of the dough and forms a semi-continuous phase within the dough. Gluten forms the skeleton of the dough, keeping the air added to the dough during the kneading process and the carbon dioxide (CO2) gas generated by the yeasts within the dough, making the bread swell and having a porous structure. 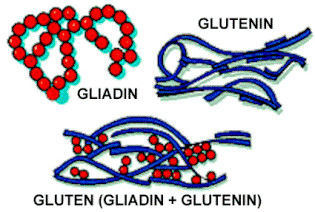 Gluten increases the water holding capacity of the flour and stabilizes its structure by giving water (dehydrated) when heated to about 85 0C. In the kneaded bread dough, insoluble but highly water-absorbing (hydrated) gluten forms a semi-continuous phase within the dough by surrounding other elements of the dispersed phase, such as starch particles and air bubbles. 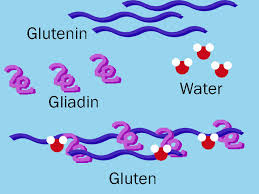 Starch is mainly formed by polymerization of α-D-glucose units. Chemically, there are two types of polymers; amylose, a linear polymer; and amylopectin, a branched polymer. In cereal starches, amylose is present in approximately 23% and amylopectin in 77%. Cereal starches contain very low amounts of fat. The starch composition also contains phosphorus and nitrogen.

The changes of starch during heating in the presence of water determine the properties of many foods. Starch is insoluble in water but swells by absorbing water when stored in a high relative humidity or contact with water. The ends in which starch absorbs water are polysaccharide hydroxyl groups. In this case, hydrogen bonds form between the water molecules and the hydroxyl groups. Starch can hold up to 30% of its dry weight in water. The swelling of the granule results in an increase of 5% in volume.
In gluten-free formulations, the dough has a more fluid structure than wheat flour doughs due to lack of gluten network. Increased viscosity in starchy formulations is due to starch uptake and swelling of water.
Starch is often found in gluten-free biscuit products as a combination of starch. For example; corn, soy, millet, rice, potato starches are mixed in certain proportions. Gums can also be used with starch.

Only you can copy it. Please give us a link if you use it on internet.

Can I use these information in my project

Thanks a lot sir

No worries.
Have a good day
Kind Regards